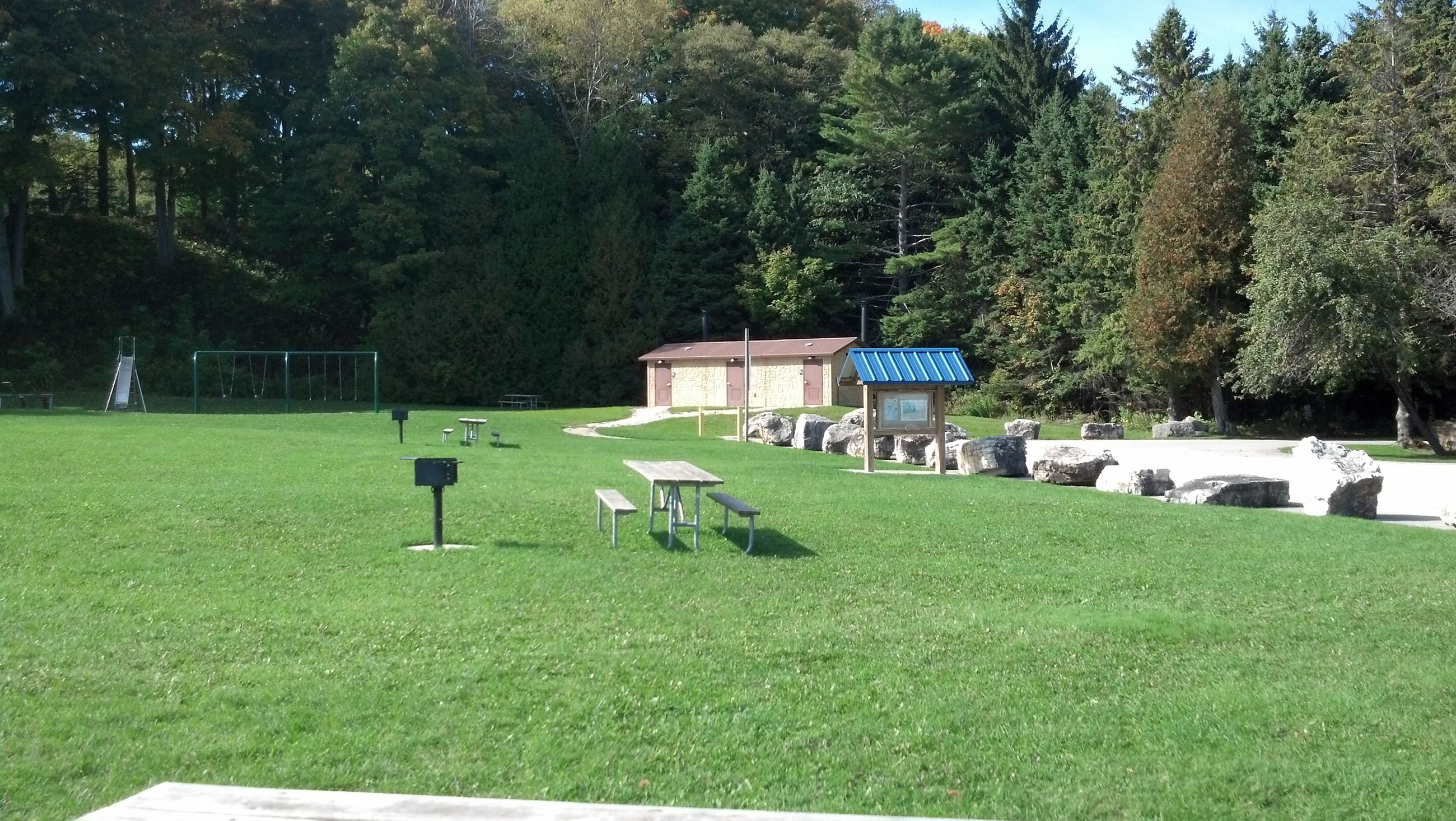 The park is characterized by its three-tiered landform consisting of the pebble-strewn Lake Michigan shore created by glacial till; a level, grassy upland area; and a higher wooded upland area. The upper levels of the park are abandoned shorelines of ancient lake waters.  Steep sandy bluffs separate each tier.

Pedestrian access to the lower tier is facilitated by a stairway.  A small stream cuts through an interesting sandy ravine—dry most of the year and lending itself to exploration—and is located along the southern side of the park.

The site is commemorated as a landing place by the French  explorer, Robert de LaSalle in 1679.

The park is located a quarter mile from the highest headland formation along the shore North of Chicago, a site described in Robert de LaSalle’s official report of his great expedition.  It was at this point that LaSalle and his men met a group of Potawatomi Indians who provided them with provisions and enabled the explorer to continue on with his adventures.

One of the oldest county parks, its current acreage was stitched together through several land purchases spanning 79 years.  Five acres was purchased from Andrew and Alvina Mueller on January 16, 1929 for $1.00.  On January 31 the same year, a   triangular piece of land between the Mueller property and County Road U, consisting of little more than an acre, was purchased for $1.00.  On   January 26, 1942, Frank and Susan Cermak sold a tract of land consisting of a little more than 2 acres to the county for $1.00.  On October 15, 1956, Andrew and Alvina Mueller sold to the county the remainder of land to the park for $200.00.

The final addition to LaSalle was made in 2005 when a long and narrow  parcel was added to the north end of the park that borders Lower LaSalle Road on the east and County Trunk “U” on the west.  The land was purchased from Jerry Guth and Orville Mueller.

According to the Peninsula Historical Review of June 1930, Clay Banks used to be once of the largest shipping points for    lumber and forest products on the peninsula.  Few remnants of this history remain.

In the upper park, an archway—built in the spring of 1930—stands near the roadway, a remnant of the park’s entrance in earlier years. The logs were imported from the Pacific Coast in honor of the mighty trees logged from the area by early settlers.  The archway was built as a grand entrance to the park for model A’s and T’s—the first cars made—to drive through to enter the park.

An Excerpt from the Journal of Robert La Salle Exploring Party

…….On the 28th (September 1679), toward noon, they got into their canoes again and rowed a good part of the night till a        cyclonic wind forced them to land at the point of a rocky summit covered by shrubs. (Whitefish Pt. north of Sturgeon Bay) There they stayed two days consuming the last of their provisions, corn and pumpkins, they had bought from the Potawatomi Indians.

They left October 1st, and after having rowed ten leagues on an empty stomach, they arrived near another village. The coast was high and steep, and exposed to the northeast wind, which was then blowing and soon grew so strong that the waves were breaking with violence on the beach (the current LaSalle Park). The Sieur de La Salle in     order to land safely had no choice but to throw   himself into the water with his three men and all together lift the canoe with its load and carry it on shore, in spite of the waves sometimes dashing above their heads. He then went to get the other canoes as they arrived landing them all safely this way, nothing having been damaged…….He then sent three of his men to buy food in the village under the protection of a peace-pipe that the Potawatomi Indians had given him earlier on the voyage.

The park includes 23 acres with 440 feet of public access to Lake Michigan in Southern Door. 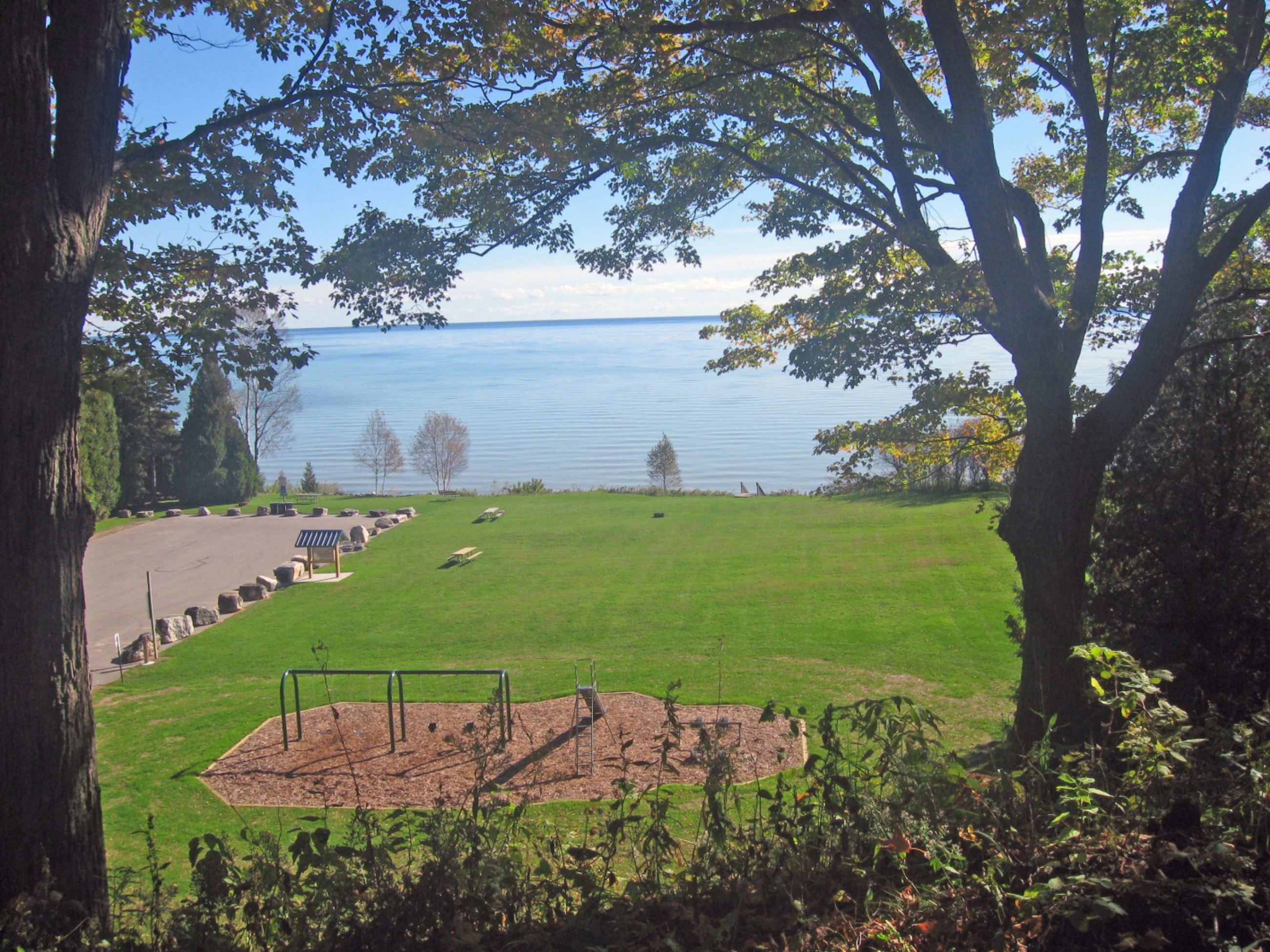