Location: 475 Mill Road in the town of Forestville.

The shallow millpond, one and one half miles long and an eighth of a mile wide, provides an easy paddle for canoes, kayaks and paddleboats as well as a relaxing ride for small-motorized boats.  A one-lane boat launch is available at the park.

Below the dam is a shallow riverbed area that is thick with fish in the spring when the water is running high.  Chinook salmon and rainbow trout are stocked in the river.  The fish return to the area to spawn, the salmon in the fall and the trout in spring—starting in April.  After spawning, the salmon’s life cycle is complete and thousands of salmon die at the foot of the dam.  The trout, however, live four to six years; they spawn and return to the lake. The sight of the fish spawn is  spectacular to view and photograph but fishing in the area 500 feet below the dam is against the law.  The vulnerable fish are protected in the shallow waters; it is considered a fish sanctuary.

The millpond is literally filled to overflowing by the upper branch of the Ahnapee River, receiving water from a drainage basin near Tornado County Park as well as nearby springs.  Taking a careful walk over the dam and viewing the spring waters rush over the spillway is an enjoyable activity for people of all ages.

The park is adjacent to the Ahnapee State Trail County Park and serves as a wayside for trail users. 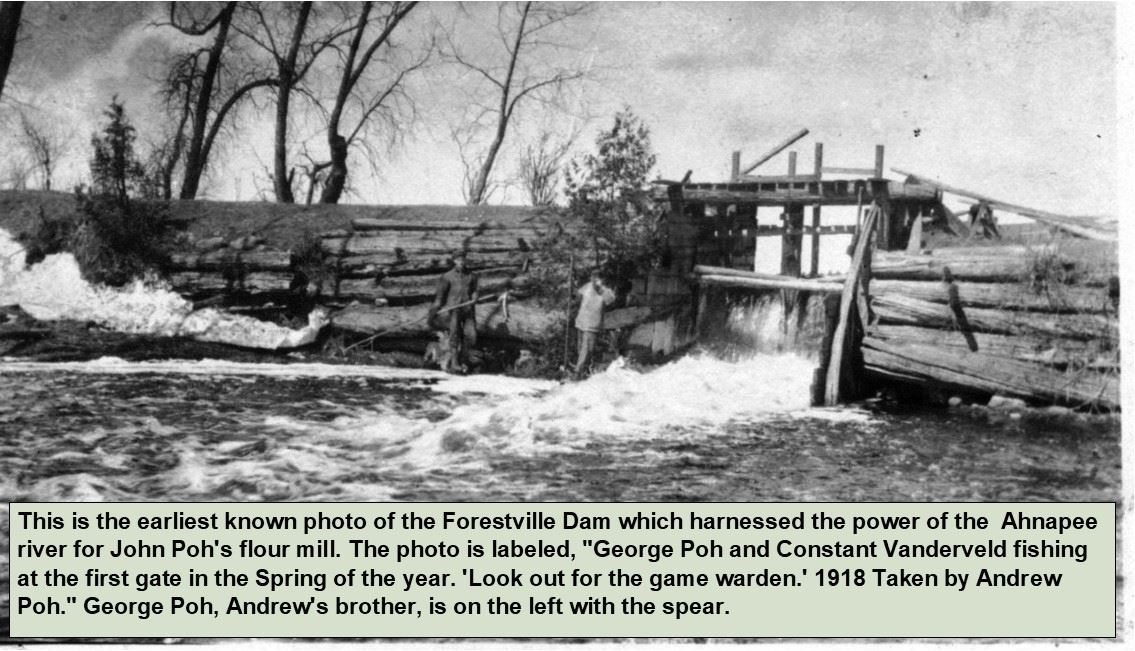 In 1877, John Fetzer and G.W. Youngs built the original dam, an earthen works to   provide power for a gristmill.  The mill processed grain into flour for people from the Belgian district and all the way up to Baileys Harbor.

At the turn of the century, John Poh bought the mill, which was closed circa 1920 after the dam washed out.  The dam was replaced as a Works Progress Administration project in 1934 and christened the Poh Community Dam and Lake a year later.

The dam was replaced in 1982 with a modern spillway structure at a cost of $160,000. During the construction, the Department of Natural Resources drained the millpond, killed off the fish, refilled and restocked the pond in an effort to recreate a prime fishing habitat.

In November 2008, Forestville Dam County Park was presented a plaque from the Door County Historical Society for the park’s significance to local history.

The park consists of 79 acres adjacent to the Forestville Dam, millpond and the Ahnapee River.