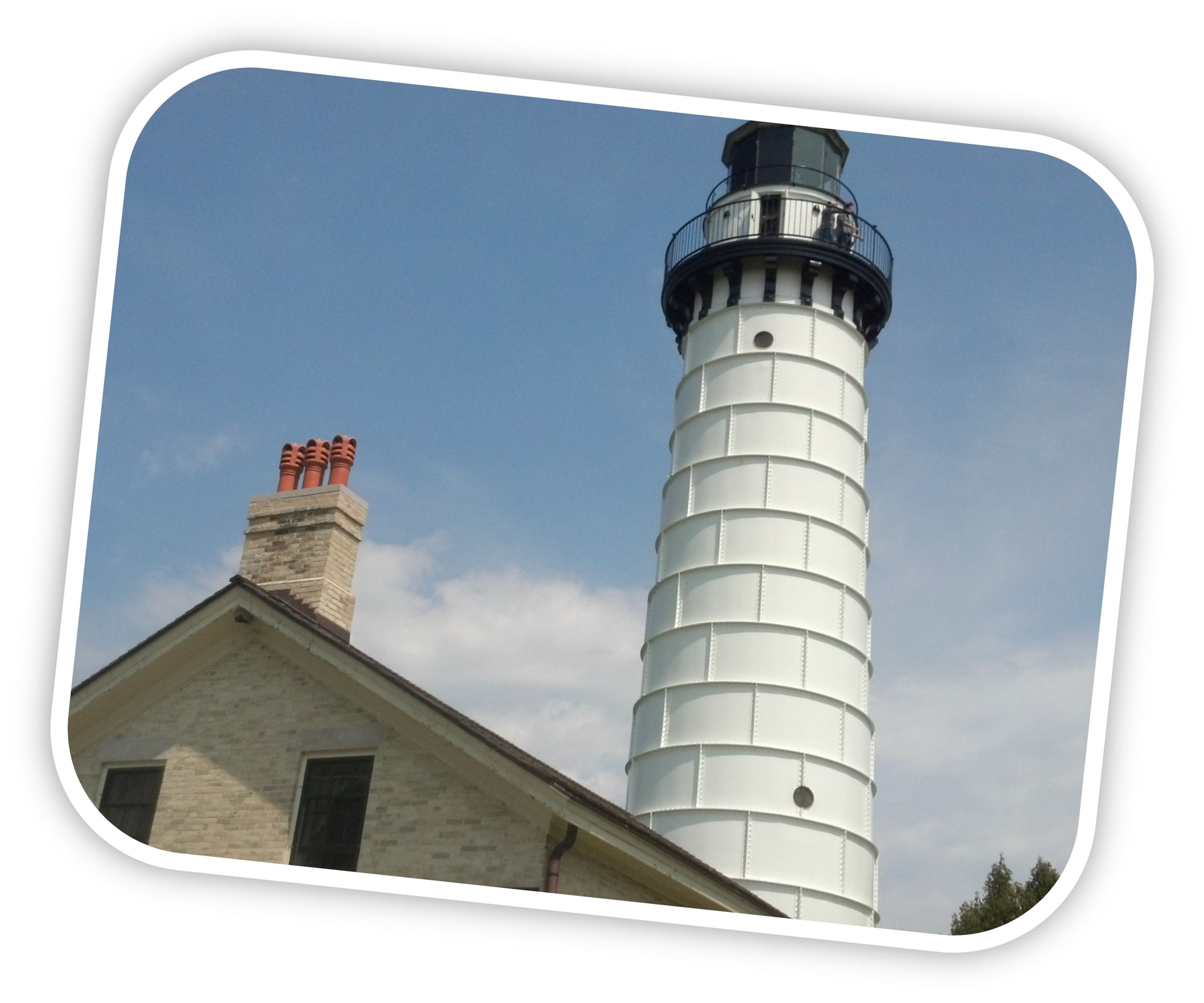 Cana Island Lighthouse County Park is a shining star in the Door County park system.  Not only is it unusual to have a lighthouse as a county park, it is also unusual to have a lighthouse so well maintained to    offer as one.  In 2008, with the opening of the lighthouse tower for the public to climb and the magnificent view to enjoy, the number of visitors to the park has soared.  Many people are drawn to Cana to catch a glimpse as well as many photos of an era long past and an 86-feet high view of Lake Michigan that is incomparable to any other location along the Peninsula.

For a modest admission fee, visitors can climb the 102 steps of the spectacular tower, experience the same captivating view from the cat walk that the lighthouse keepers took in and peer up at a working Fresnel lens.  The lens gathers light from a series of circular prisms, creating a continuous beam of light.

Although the lighthouse is the main attraction, visitors can also enjoy the natural beauty of the island’s rocky shoreline and tall evergreen trees.  Although there are no designated trails, footpaths lead out to the shore.

The area is also popular with divers, who enjoy viewing the wreck of the Frank O’Connor, found just off the island’s shore.  The 300-foot steamer built in 1892 burned to the waterline in 1919.  The steel components—propeller, shaft, boilers, winches, anchors remain at the bottom of the lake for viewing. The area waters also offer a beautiful paddle in a canoe or kayak.

Built in 1869 for $12,792.55, Cana Island Lighthouse’s tower, made of cream city brick, was the tallest building in Door County.   The first official lighting of the beacon was on January 28.  Verified by telescope during the first year of operation, 4,862 ships passed the station during daylight hours.  Keepers filled the oil and kept the beacon shining until the lighthouse was automated in 1944.  It remains a functioning navigational light of the Great Lakes.

Residents of the island not only included past lighthouse keepers and assistants, but also the McCarthy family, who leased a summer residence from the Coast Guard for 25 years starting in 1945, and Louis and Rosie Janda, who served as caretakers from 1976 until 1995.

The oil house once stored the fuel for the lighthouse lamp; it is the only six-sided stone structure of its kind in the Great Lakes.

Cana Island Lighthouse was listed in the National Register of Historic Places in 1976.

On April 27, 2006, a new era began for Cana Island. The Bureau of Land Management transferred ownership of the land free of charge to the County of Door to be used as a park as well as to preserve the lighthouse while allowing public access to it.  To fulfill the stipulations, the County of Door partners with Door County Maritime Museum to manage the island and lighthouse, something Door County Maritime Museum had done in partnership with the US Coast Guard since 1970.  Fees generated are shared but designated for lighthouse preservation and restoration.

The residence at the lighthouse contains exhibits and a small museum store and visitors can view shipwreck artifacts in the oil house.  Restrooms and parking available.

The island, accessible by a short walk across a causeway, is open to the public a half-hour before sunrise till a half-hour after sunset.  The lighthouse and tower are open 10 a.m. to 5 p.m. May through October.  A fee is charged to access the island which includes admission to the lighthouse and an additional fee is charged to climb the tower during hours of operation.